Greenland was originally part of the town of Portsmouth, which was first known when settled in the 1630 as “Strawbery Banke.” (The region had been explored over the previous century by numerous navigators and fur trappers, who found the area inhabited by native Americans of the Abenaki tribe.) Grants from England’s King Charles I led to the establishment of settlements at Portsmouth, Exeter, Hampton, and Dover. 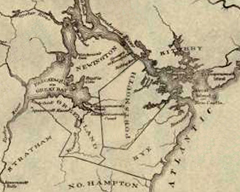 Francis Champernowne. Integral to the history of both Greenland and the Weeks Brick House is Capt. Francis Champernowne (1614-1687), a man born into privilege, wealth, and connections in Devon, England, who settled in Greenland in 1640. He named his 400-acre tract “Greenland Farm,” and reportedly his house stood near what is now the 18th hole at Portsmouth Country Club. Champernowne came and went — back-and-forth to England & Barbados — and eventually removed to Maine. In 1650 he leased his farm to Samuel Haines, who is recognized as Greenland’s first “permanent” settler. On one of Champernowne’s return voyages from England in 1648 came a 15-year-old servant, Leonard Weeks (1633-1707). Leonard Weeks eventually received his own land grants between 1656 and 1669.

Samuel Haines (1611-1686) left England in 1635, bound for Ipswich, Mass., as a servant to the well-to-do John Coggeswell. (Both survived the break-up of their ship, the Angel Gabriel off Pemaquid Point, Maine, where it had sought shelter in a raging storm.) In 1650, by this time free of obligations to Coggeswell, and with a family of his own, Haines leased Capt. Champernowne’s farm for two years. In 1653 the town of Portsmouth granted him 10 adjacent acres, off what is now Tide Mill Road. Haines became a mill owner in 1670, and in 1671, the first deacon of the North Church of Portsmouth. By the time of his death Samuel Haines owned 101 acres in Greenland.

Early Settlers. In his town history, Rambles about Greenland in Rhyme, Micajah Otis Hall estimates that in 1653 there were 50-60 families living in the area that is now Portsmouth, Newcastle, Rye, Greenland, and Newington. 17th-century settlers (i.e. “male heads of household”) of Greenland whose names appear in various records and in the pages of Hall’s history include:

The threat of Indian Attacks. In the early years of the settlement of Greenland, the threat of Indian attacks was always present. Tension increased in 1675 with the outbreak of what became known as King Philip’s War. Although the center of Greenland was never attacked, settler John Kenniston, who lived in the town limits on the border with North Hampton, was killed and his house burned by Indians in 1677. In 1696 an Indian raid burned five homes and killed 14 residents in Portsmouth Plains, just four miles from the Leonard Weeks farmstead.

Miscellaneous Milestones. In 1671, the North Church of Portsmouth was established. At the same time, a burying ground was set aside on a knoll overlooking the Winnicut River, at the back of the adjoining properties of Leonard Weeks and Thomas Avery. In 1675, John Johnson was granted a tavern license. In 1703, the separate parish of Greenland was incorporated. In 1705 inhabitants petitioned to have their own minister and schoolmaster, and in 1707 the town hired William Allen for both positions. In 1710 Samuel Weeks built a 36’x22′ brick house on his family farmstead.

The mid- and late- 17th-century economy of the area was dominated by farming, fishing, timber harvesting, and coastal trading.

Farming. The region’s soil proved to be good for farming, and like so many early coastal settlements in New England, agriculture at first supported only a very local, self-contained, but vitally necessary economy. Family subsistence farming was complemented by barter and exchange among friends, family, neighbors, and community. The production of the earliest grist mills, for example, was almost entirely for local consumption.

Fishing. The brackish waters of the Winnicut River meant, at least at that time, a large population of smelt and river herring, which became an important source of food and income for residents of Greenland.

Timber Harvesting. When inland forests were cleared for farming, logs were floated down the Winnicut River to the sawmills. The processed lumber was shipped through Great Bay to Portsmouth, and then on to England.

Coastal Trading. As the region grew, the lumber trade became tied closely to the increase in the regional shipbuilding activity. Bolstering the regional economy was the development of a shallow-draft vessel ideal for the tidal waterways of Great Bay, the gundalow. As important as the money-making goods going out of Greenland at the time, was the access to goods coming into Greenland, as the late 17th century was a time when overland transportation was difficult, roads were little more than oxcart paths, and material goods were few.

The Town Landing (1663): Transportation & Communication. Greenland’s particular southern location on Great Bay was ideal for the lumber trade. The massive trees that were harvested further inland were floated down the Winnicut River and other Great Bay tributaries to the sawmills. The designated center for the goods going out or coming in to Greenland was the Town Landing, so designated in 1663 at the end of Tide Mill Road. The road itself extended from the Greenland town center to the salt marsh and bank of the Winnicut River.

Today, the Town Landing is all-but-forgotten — at the end of the line, off the beaten path, a dead-end at a deserted marsh. Today it is difficult to fathom that there was once frequent traffic of goods hauled to-and-fro on Tide Mill Road. And it might be difficult to believe today that in the 17th and 18th century, the tidal waterways actually provided the easiest way to move heavy materials like lumber, or large-volume goods in barrels. 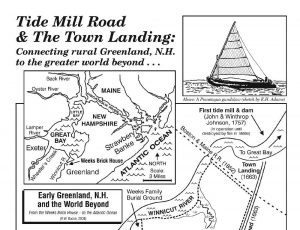 As the region’s population and economy grew in the 18th century, Greenland and the outlying towns came to embrace an identity separate from the commercial center of Portsmouth. Greenland remained an agriculturally-oriented town, while Portsmouth grew with the fortunes of its prosperous merchants. As such, the Town Landing and its comings-and-goings served a communications function as well as a transportation function. The gossip from the big city, as well as the goods, traveled by water. In the earliest days of Greenland, the Town Landing was the connection to the outside world of Portsmouth, Boston, and even Europe. In 1757 the Johnson brothers built a dam and tide mill across from the Town Landing that remained in operation until the 1860s — hence the name of “Tide Mill Road” on the 21st-century street sign seen from Rte. 33 today.

The web site of Greenland’s Weeks Library features several pages worth of local history, including a narrative, a timeline, and an excerpt from A Pleasant Abiding Place: a History of Greenland, N.H., 1635-2000, by local historians Paul C. Hughes and Paul F. Hughes.

by Paul C. Hughes and Paul F. Hughes, December 24, 1966-February 8, 2002. Weeks Public Library in Greenland, N.H. has made an excerpt of this compendious 11-volume work available online. The only publicly-available hard-copy of the 2600-page history, written by the father-and-son team of local historians, is at the library.

by Caleb Stevens Gurney (C.S. Gurney, 1902). This is a link to the Google Books online copy of this 225-page public domain book, which includes a photo of the Weeks Brick House.

Rambles about Greenland in Rhyme

by Micajah Otis Hall (Boston, Mass.: A. Mudge & Sons, Printers, 1900). This is a link to the Google Books online copy of this 238-page local history in the public domain. The book includes information about the Weeks family and the Weeks Brick House.

END_OF_DOCUMENT_TOKEN_TO_BE_REPLACED

In 1975 the house and acreage was purchased by an organization of both descendants and preservation-minded individuals interested in the future of the distinctive structure. Early initiatives included securing recognition on the National Register...