About the Weeks Brick House

The Weeks Brick House in Greenland, N.H., built c. 1710 by Samuel Weeks (1670-1746), is among the earliest brick houses in New England — and may be the oldest made of bricks fired on the site. The architecturally significant structure, pictured above in an early 20th-century postcard view, was listed on the National Register of Historic Places on July 20, 1975. The house, which has not only endured the years, but also survived earthquakes and a fire, was built on the family farmstead established by Leonard Weeks (1633-1707), father of Samuel. An early settler of Greenland, Leonard Weeks was granted land in what was then part of Portsmouth, N.H., beginning in 1656. (For a history of the farmstead over the course of 300 years in the family, click here.)

In the late-17th and early-18th century, the threat of Indian attack was always present, and it is plausible conjecture that Samuel Weeks elected to build with brick for reasons of security. Another plausible interpretation is that the brick house was (1) a personal expression of determination to see the crisis through, and (2) a commitment to permanence even in the face of uncertainty. The long-held belief is that the house was built of native bricks fired on the site, instead of those brought on ships as ballast. The Flemish bond pattern (pictured below), with its dark headers, which were exposed to the most intense heat, is still quite noticeable.

The two-and-one-half story house measures 36 feet wide x 22 feet deep. The brick walls are 18 inches thick. The timbers supporting the upper floors are oak, 12 inches x 14 inches. The sleepers are about 10 inches in diameter, with the bark left on. In its earliest period, the house was heated by four massive fireplaces off of two large end chimneys.

C.W. Brewster, a Portsmouth editor and columnist, described the Weeks Brick House in one of his “Rambles About Portsmouth” articles in 1869: “The house was built on the main road, but the straightening of the road half a century ago, throws it on a circular lane several rods on the side. The speckled appearance of the house is made by having black headers scattered among the bricks all over the front. The bricks were burnt in front of the house. The walls of the house are eighteen inches thick. It is of two stories; the lower story is eight-and-one-half feet, the second eight feet. The windows were originally of small diamond glass set in lead. Some of them have been in the house within the last fifty years. The timbers used throughout the house and for the roof are all of hard wood. The beams in the cellar are squared 12 by 14 inches. The sleepers are of red oak, about 10 inches in diameter, with the bark on. There are planks on the inside of the walls, and the plastering is on reft wood nailed to the plank. There are marks of the house being injured by an earthquake, probably in 1755. The house was evidently built as a sort of garrison, with a view of safety from being burnt by the Indians.”

At some point in the early life of the brick house, a one-and-one-half story wood-framed “ell” was added to the rear. The outline of the roof is still visible on the back of the house today. This was essentially an extension of the main house, and provided a connection to the outbuildings (… and outhouse), as well as living space for seasonally-hired farmhands. There is no firm evidence at present, but it is possible that the “ell” was the location of original dwelling of early settler Leonard Weeks.

The will of Samuel Weeks indicates there were several outbuildings by 1746 — the beginning of a complex of connected barns and storage sheds that would keep on growing into the 20th century. The largest barn in Samuel’s time was about 50 feet northwest of the brick house. Ensuing generations expanded the apple orchards, and cider production, and a large cider house was built behind the house. In the mid-19th century a new barn was built, measuring 41-feet x 55-feet. Its design followed the trend of the time, with its door at the gable end. Connecting this new barn to the house were a 21-foot x 18-foot shed, a 48-foot x 28-foot multi-purpose building, a carriage shed, and a horse tie-up.

By the early 20th century (as in the photo at right) the farm had shifted its focus to dairy farming, and the barn could accommodate 25 cows. Thornton “Skip” Weeks, who grew up in the brick house, recalled the progression of attached buildings as they were in the 1930s: From the brick house, one passed into the ell, which was its own self-contained living area.. The ell had a kitchen at the back, which was also was the “milk room.” After the ell came the outhouse, then the woodshed, the carriage barn-garage, a 4-horse stable, and finally the barn with tie-up for 25 cows. 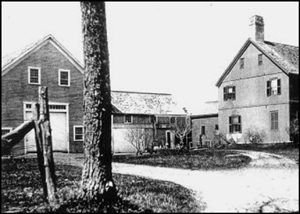 Beyond the barn were a wagon shed and chicken house. In the barn was an engine room, the source of power to pump water from the wells and run the saw to cut cordwood. The ell connecting all the buildings to the main house was torn down and replaced with a two-story back porch in the mid-1930s. (The recollections of Thornton “Skip” Weeks (1921-1998), the last of the family to live in the brick house, published in a WBH newsletter in September 1995, include detail about the interior of the house, the outbuildings, and the physical setting. To read his recollections of life on the farmstead in the 20th century, click here.)

The interior of the house evolved along with changing technology and the changing norms of domestic life. For instance, by the early 19th century, the massive fireplaces for heating had given way to three smaller, more efficient fireplaces, as well as four stoves. Another cast-iron stove was added in 1850. (Once again, the recollections of Thornton “Skip” Weeks are the best source for description of the Weeks Brick House in its last years as a farm.)

Two earthquakes and a fire …

The Weeks Brick House survived an earthquake unharmed in 1727, but on November 18, 1755 the earthquake that reportedly toppled 1500 chimneys in the Boston, Mass. area, cracked some giant interior beams and bowed and cracked both gable-end walls of the brick house. Scientists today estimate the 1755 earthquake would have registered 6.0 on the Richter scale. The epicenter was near Hampton, N.H., and damage was reported from Boston to Portland, Maine. In the aftermath of the quake, iron tie-rods were run through the house and connected to protect against any future earthquakes. The cracks are still visible today. “The Day the Earth Shook,” by Mike Bisceglia, The Hampton Union, June 2, 2006, is a brief, informative look at the earthquake of 1755.

On March 4, 1938 a fire that started in the barn and was fueled by fermenting hay consumed all of the outbuildings. Fortunately, since the ell was torn down a few years earlier, the outbuildings no longer connected to the brick house. However the new back porch was destroyed, and there was some damage to the roof and attic of the main house. The charred beams in the attic are still visible today. (see images)

END_OF_DOCUMENT_TOKEN_TO_BE_REPLACED

Ann Leighton was the professional name of Isadore Smith (1902-1985), the renowned garden historian, scholar, author, designer, and landscape architect who, with Kitty Weeks, designed the colonial-themed...

END_OF_DOCUMENT_TOKEN_TO_BE_REPLACED

“Growing Up in an Old Brick House”: Remembrances of Thornton (Skip) Weeks, Jr.

In September 1995, Thornton (Skip) Weeks, Jr. (1921-1998), the last family member to live in the Weeks Brick House before it was sold in 1968, shared his memories for the WBH newsletter. To read his recollections of the house in the mid-20th century, click here.

In 1935, after the ell was torn down and before the 1938 fire, a team from the WPA project, the Historic American Buildings Survey, visited the Weeks Brick House to photograph and measure the building. 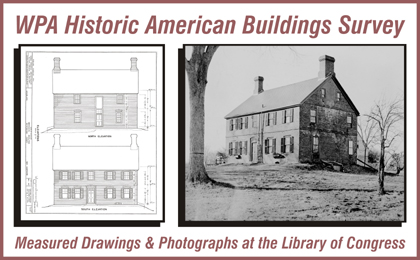 Are you a brick house enthusiast?
Read about the 1678 Peter Tufts House

Medford, Mass. was blessed with ample resources of clay ideal for brickmaking. And it didn’t hurt that one of its early settlers, Thomas Eames, was an experienced bricklayer and brickmaker. From 1650 to 1750 brickmaking was the town’s primary business. Brickyards were located throughout the town. Loads of bricks were floated down the Mystic River to Boston, and then beyond to meet growing demand. Numerous sons and grandsons of Peter Tufts (1617-1700) followed him into the brickyard business, and c. 1678 the family’s house was built of Medford bricks. The clay was dug from the banks of the Mystic River about a hundred yards away. Since 1980 the Peter Tufts House has been owned by the Medford Historical Society. 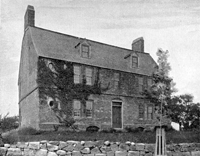 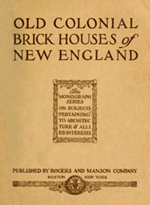 by Albert J. MacDonald (Rogers & Manson Co., 1917). This is a link to an Internet Archive online and/or downloadable copy of this 55-page public domain book, which includes text, drawings, and photos of notable Colonial-era brick houses. While the book mentions the Peter Tufts House (1678, Medford, Mass.) and the Hazen Garrison (1724, Haverhill, Mass.), most of the concentration is on the later Colonial period.

Early American Architecture: From the First Colonial Settlements to the National Period 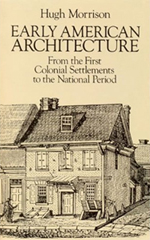 by Hugh Morrison (Oxford University Press, 1951). This is a link to the Google Books online preview of this 619-page book, which is a well-illustrated comprehensive survey of domestic and public architecture. On pgs. 72-75 is an overview of some of the earliest brick buildings in New England. A reprint of this classic survey by the noted Dartmouth College professor of architecture is currently available from Dover Publications. 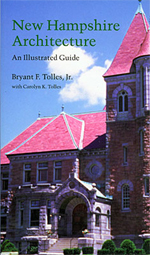 by Bryant Franklin Tolles & Carolyn K. Tolles (University Press of New England, 1979). This is a link to the Google Books onlinepreview of this 393-page book. The authors selected 400 buildings across New Hampshire to describe in text and illustrate with photos, including the Weeks Brick House, which according to the authors “may be the oldest surviving brick dwelling in New Hampshire.” (This link is to a limited preview of a book that is still available through your favorite bookseller.) 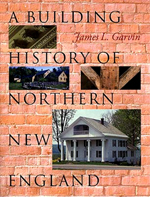 by James L. Garvin (University Press of New England, 2002). This is a link to the Google Books online preview of this 211-page book, an outstanding survey of domestic architecture in New England. The book is chock full of technical and stylistic analysis useful to both the property owner dealing with maintenance or restoration, and the enthusiast of New England architecture. The author is the State Architectural Historian for the New Hampshire Division of Historical Resources. (This link is to a limited preview of a book that is still available through your favorite bookseller.)