A History of the Weeks Family Farmstead

The Weeks family farmstead began with land grants to Leonard Weeks (1633-1707) between 1656 and 1669. By his death in 1707, he owned 60 acres, a tract that extended from the “highway” (present Rte. 33) to the town landing on the Winnicut River (at the end of Tide Mill Road). (For a biographical sketch of Leonard Weeks, see our Weeks Genealogy page.)

The distinctive brick house was built in 1710 by Samuel Weeks (1670-1746), son of Leonard Weeks. The farmstead remained in the family for nine generations until it was sold in 1968. 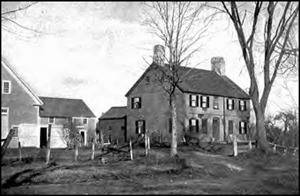 A few years later, when commercial development of the property was imminent, Leonard Weeks & Descendants in America, Inc. was formed, and purchased the 33-acre farmstead in 1975. Subsequently the Weeks Brick House was designated a New Hampshire Historic Site, and was placed on the National Register of Historic Places.

The late-19th century photo above right shows the brick house, the “ell” to the rear, and the complex of adjoining outbuildings to the left of the house. The barns and outbuildings were destroyed by fire in 1938. Fortunately damage to the house was minimal.

Farmstead ownership & farm use through the years

Based on the research and sources in Neill DePaoli’s 2003 report, “Three-and-a-Half Centuries in Greenland: The Weeks Brick House Farm of Greenland, N.H.” (Photos below by R.W. Bacon)

Leonard Weeks (1633-1707) (m2. Mary Redman; 8 children). Leonard Weeks arrived from England in the late 1640s as a teenage servant of Capt. Francis Champernowne. By 1656 Leonard Weeks was on his own, and the Town of Portsmouth (of which the present Greenland was a part) granted him 8 acres of land.

In 1660 and 1667 he received four additional grants of between 10 and 44 acres. The location and appearance of his dwelling house are unknown. What is known is that the farmstead was at the center of 17th-century activity in Greenland, between the “highway” (present Rte. 33) and the Winnicut River. The Town Landing on the Winnicut, which provided access to Great Bay, the Piscataqua River, and the world beyond, was at the foot of the present Tide Mill Road that borders the Weeks property.

The farmstead was known to have at least two barns and one other outbuilding in addition to a house. Grazing land, crop land, salt marsh, and wood lots were located on both sides of present-day Rte. 33. In the last quarter of the 17th century, Indian attacks were on the rise. While Greenland was never attacked, the threat of such raids was a constant concern. In 1706 Leonard Weeks willed his 60-acre farm to his son, Samuel Weeks.

Samuel Weeks (1670-1746) (m. Eleanor Haines; 7 children). Judging from the probate inventory of Samuel Weeks, he was the most successful of the Weeks farmstead owners. The most visible indicator of his economic status was the distinctive brick house built about 1710. Architectural historians note that less than a dozen brick houses are documented in 17th century New England, and those in a rural setting were rare in the extreme. Records indicate that Samuel Weeks owned oxen, cattle, horses, and pigs; grew corn and wheat; harvested salt marsh hay; kept bees for honey; and expanded his land-holdings. Samuel willed his 80-acre farmstead to his son, Walter Weeks.

Walter Weeks (1706-1774) (m. Comfort Weeks; 10 children). Records indicate that Walter Weeks owned cattle, sheep, pigs, and one horse; and grew corn, wheat, potatoes, and flax. He also devoted two acres to an apple orchard. He expanded his land-holdings to include a 42-acre farm and apple orchard in Newmarket, N.H. Walter Weeks willed the farmstead to his son, William Weeks.

William Weeks II (1779-1849) (m. Harriet Barker; 5 children). While William Weeks II and his family lived on the Weeks Farmstead, he did not gain full ownership until 1819. Then, between 1819 and 1833, he sold, mortgaged, leased, and repurchased the farm six times. Records indicate that William Weeks II owned horses, oxen, cows, sheep, poultry, and pigs. He grew corn, wheat, and potatoes; and maintained production of the apple orchard. William Weeks II built new barn with a gable-end entrance that measured 41 x 55 feet. The new barn was connected to a series of outbuildings, following the trend of modern farm efficiency: a shed (21’x18′), a tool shop & cider house (28’x48′), a carriage shed, and a horse tie-up. William Weeks II willed the farmstead to his wife, Harriet (Barker) Weeks.

Robert B. Weeks (1818-1897) (m. Anna Jewell; no children). Harriet (Barker) Weeks turned the management of the 100-acre farm to her son Robert B. Weeks, who became sole owner after her death in 1864. Records of 1860 indicate the farm had horses, oxen, cows, sheep, and pigs; and grew corn, oats, barley, potatoes, and hay. As years went on, the difficulty of farming with no children or hired help to depend on must have increased, and may be reflected in the farm census records of 1880. The farm was at 67 acres, down from 100, and consisted of 6 acres of tilled land, 46 acres of meadow, and 15 acres of woodland. The farm had 29 animals, but 20 were chickens. The 10-acre apple orchard was the farm’s primary income-producer. Robert B. Weeks willed the farmstead to his nephew, John W. Weeks, in 1897. 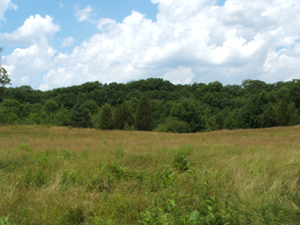 John W. Weeks (1848-193?) (m. Sarah Lord; 3 children). After his uncle, Robert B. Weeks, willed him the farm, John W. Weeks, a businessman and grocer, shifted his focus to dairy farming and apple growing. Records indicate he owned cows, horses, pigs, and chickens. Multiple generations of the Weeks family, as well as hired hands, lived in the brick house and the attached ell. Upon the death of John W. Weeks, the farmstead passed to his son, Thornton (Skip) Weeks, Sr.

Thornton Weeks, Sr. (1882-195?) (m. Florence; 1 child). Thornton Weeks, Sr. carried on the dairy farming operation of his father, John W. Weeks. The dairy barn accommodated up to 25 cows. A gasoline engine drove belts that ran pumps for the wells and a circular saw for cutting firewood. In 1936 Thornton Weeks, Sr. tore down the rundown ell to the rear of the brick house, and built a two-story porch. Tearing down the ell probably saved the house from destruction in the 1938 a fire that burned all the connected outbuildings to the ground. Some attic beams in the brick house were charred, and the porch was destroyed, but the house itself survived. The porch was rebuilt, but with the fortunes of small family farms in decline, the barn complex was not. A garage was built at the former site of the farm buildings. In the 1950s, the new Rte. 33 effectively cut off the property from the town center, and traffic noise became a constant annoyance.

Leonard Weeks & Descendants in America, Inc. (1975-Present). A few years after the property was sold out of the family in 1968, developers saw the potential of the 33-acre tract along a busy road in a growing suburb. In 1975 Leonard Weeks & Descendants in America, Inc., a non-profit tax-exempt corporation, was formed to purchase the brick house and the original family farmstead and thus avert commercial development of the property.

That same year the property was designated a New Hampshire Historic Site and placed on the National Register of Historic Places. Since then the distinctive brick house has been conserved, an authentic colonial-era “housewife’s garden” planted (1977), a permanent conservation easement secured (1992), and hiking trails developed (2001) for public enjoyment. The organization rents part of the Weeks Brick House to a tenant to provide both income and security. (Pictured above: shows the Weeks Brick House in the distance in a photo taken from the extreme northeast corner of the present hayfield — a point where one of the hiking trails emerges from the woods.) 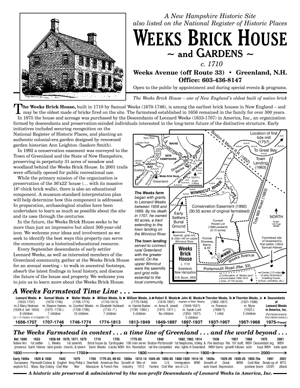 For a detailed viewable & printable map of the Weeks family farmstead — a self-contained PDF file in 8.5″ x 11″ format — that includes a timeline of ownership and Greenland, N.H. history, click here.

“Growing Up in an Old Brick House”: The Remembrances of Thornton (Skip) Weeks, Jr.

In September 1995, Thornton (Skip) Weeks, Jr. (1921-1998), the last Weeks family member to live in the Weeks Brick House before it was sold in 1968, shared many of his memories for an article in the WBH newsletter. To read his recollections of his early life on the farmstead in the 20th century, click here. 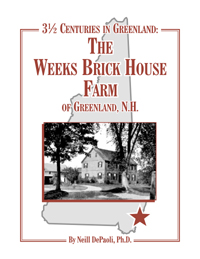 In September 2003 archaeologist Neill DePaoli, Ph.D., completed this historical study of the Weeks Farmstead in preparation for subsequent archaeological investigations on the property. It stands as the most comprehensive compilation of Weeks Farmstead history, and includes ownership and farm use, archaeological recommendations, photos, maps, probate inventories, and sources (65 endnotes). In time for the 2010 Tercentennial Meeting, the book was professionally redesigned for easier reading of the scholarly content, with recent photos rendered in color, existing maps & graphics sharpened for clarity, and an all new cover. This “must-have” publication for Weeks family descendants is available for $25 (includes shipping). Send your order with payment to The Weeks Brick House, P. O. Box 93, Greenland, NH 03840. To purchase online and pay by credit card or PayPal, visit our Donate and Shop pages.

END_OF_DOCUMENT_TOKEN_TO_BE_REPLACED

Are you chasing the right immigrant ancestor?

For Weeks family researchers there is often confusion over a number of 17th-century immigrant ancestors with the same Weeks surname. The information below may help you determine whether you are chasing the...