The descendants of Leonard Weeks

The first several generations of the descendants of Leonard Weeks (1633-1707) of Greenland, N.H. are generally well-documented. The 1889 work by Jacob Chapman, Leonard Weeks, of Greenland, N. H. & Descendants, 1639-1888 is known to have errors regarding Leonard Weeks himself. Longtime Weeks family genealogist — and longtime member and friend of the Weeks Brick House — the Rev. Frank H. Weeks of Cranston, R.I. (1930-2019), updated Chapman’s work with his 2005 compilation, Leonard Weeks and Descendants 1639-2005. In 2016 Rev. Weeks published an updated edition of this genealogy compilation. Descendants of Leonard Weeks 1636-2016, Vol. 1 & 2, is packed with photos and historical notes among its 1118 pages. The 2005 edition is held by the research library of the New England Historic Genealogical Society in Boston, Mass.. 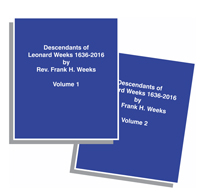 Former WBH president Tom Ayres has preserved the massive genealogy database of descendants of Leonard Weeks that was compiled by Rev. Frank Weeks over many years, and he continues to update information as it is provided. Those with new information to add may contact Tom Ayres by email at tayres1941 “at” gmail.com.

Professional genealogist Janet Ireland Delorey (1932-2013) of Shrewsbury, Mass., a Weeks descendant and guest speaker at a past WBH Annual Meeting, contributed significantly to research on Leonard Weeks and the Weeks family, especially regarding his English origins and the identity of his wives. See articles in the New Hampshire Genealogical Record: “Which Mary is the wife of Leonard Weeks of Greenland, New Hampshire” (NHGR 15, No. 4, pg. 145-51, October 1998), and, with Melinde Lutz Sanborn, FASG, “New Thoughts on the Family of Leonard Weeks” (NHGR 19, No. 2, pg. 41-49, & No. 3, pg. 101-113, April & July 2002).

Leonard Weeks — of the Weeks farmstead, immigrant ancestor.
(Based on the findings of Janet Ireland Delorey in the articles referenced above, and on the research of Dr. Neill DePaoli noted on our Farmstead History Page.)

Leonard Weeks was born in England about 1633, a date based on four depositions to New Hampshire courts between 1672 and 1705. The specific place of his birth is unconfirmed, and his parents are unknown.

Evidence indicates he was an unmarried teenage servant or hired man of a shipmaster, Capt. Francis Champernowne (1614-1687), and probably arrived in the coastal New Hampshire/Maine region in the late 1640s, but no later than 1655. Leonard Weeks first lived and worked on Capt. Champernowne’s farm. which was located on what is now the grounds of the Portsmouth (N.H.) Country Club. 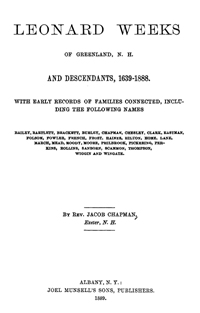 In 1660 and 1667 Leonard Weeks received four additional grants of between 10 and 44 acres. The location and appearance of his dwelling house are unknown. (At right is a view from the back of the present house toward the far north corner of the open field.) What is known is that the farmstead was at the center of 17th-century activity in Greenland, between the “highway” (now Rte. 33) and the Winnicut River. The Town Landing on the Winnicut, which provided access to Great Bay, the Piscataqua River, and the world beyond, was at the foot of the present Tide Mill Road that borders the Weeks property. The farmstead was known to have at least two barns and one other outbuilding in addition to a house. Grazing land, crop land, salt marsh, and wood lots were located on both sides of present-day Rte. 33. Through the years Leonard Weeks served as surveyor of highways, constable, assessor, and fence-viewer. At the Portsmouth Congregational Church, he was assigned front-row pew #4.

He also appears numerous times in early New Hampshire court records, mostly giving depositions on routine matters. However, Leonard Weeks has the distinction of being the first person in Greenland ever tried in court for a crime. In June 1660 at the county court in Portsmouth, Leonard Weeks was charged with “Swareing by god & Callinge John Hall of Greenland ould dogg & ould Slave & [saying] that he would knocke him in the head: this is testifi[e]d by Thomas Peverley & Joseph Attkinson.” Leonard pleaded guilty and was sentenced to pay ten shillings, “& to have an admonition for his reviling & threttning speeches.” Weeks was tried before a jury that included his neighbor, Samuel Haines.

In 1706 Leonard Weeks willed his 60-acre farm to his second son, Samuel Weeks. Leonard Weeks died in 1707, and most likely is buried in the early settler burying ground at a corner of the farmstead far back in the woods, overlooking the Winnicut River.

Judging from the probate inventory of Samuel Weeks, he was the most successful of the Weeks farmstead owners. In addition to his thriving farm, in 1697 Portsmouth selectmen authorized Samuel Weeks to build a mill on the Winnicut River for cutting timber and grinding grain. The most visible indicator of his economic status was the distinctive brick house (pictured at right) built about 1710. Records indicate that Samuel Weeks owned oxen, cattle, horses, and pigs; grew corn and wheat; harvested salt marsh hay; kept bees for honey; and expanded his land-holdings. 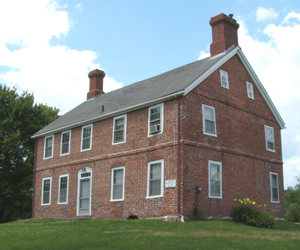 Samuel Weeks was captain of the Greenland militia in 1712-13. He was a Portsmouth selectman in 1705, and from 1709-14. At various times between 1696 and 1719 he served as assessor, constable, surveyor of highways, tythingman, and fence viewer. In 1706 he was one of the 29 founding members of Greenland’s Congregational Church.

Samuel willed his 80-acre farmstead to his son, Walter Weeks. Samuel also owned a second farm closer to Great Bay that he willed to another son, Matthias. Samuel Weeks died in 1746.

For Descendents of the Weeks Family (PDF)

If you are descended from the Weeks family of Greenland, N.H., click here for a self-contained PDF file with biographical and genealogical information about Leonard Weeks (1633-1707) and his family.

For Descendents of the Weeks Family (PDF)

If you are descended from the Weeks family of Greenland, N.H., click here for a self-contained PDF file with biographical and genealogical information about Leonard Weeks (1633-1707) and his family.

For Descendents of the Presumed Builder (PDF)

If you are descended from the presumed builder of the Weeks Brick House, Samuel Weeks of Greenland, N.H., click here for a self-contained PDF file with biographical and genealogical information about Samuel Weeks (1670-1746) and his family.

For Descendents of the Presumed Builder (PDF)

If you are descended from the presumed builder of the Weeks Brick House, Samuel Weeks of Greenland, N.H., click here for a self-contained PDF file with biographical and genealogical information about Samuel Weeks (1670-1746) and his family.

The family groups sheets, in the standard NEHGS Register format, are based on the research findings of genealogist Janet Ireland Delorey published in the New Hampshire Genealogical Record: “Which Mary is the wife of Leonard Weeks of Greenland, New Hampshire” (NHGR 15, No. 4, pg. 145-51, October 1998), and, with Melinde Lutz Sanborn, FASG, “New Thoughts on the Family of Leonard Weeks” (NHGR 19, No. 2, pg. 41-49, & No. 3, pg. 101-113, April & July 2002). Ms. Ireland’s work addressed some of the “fuzzy areas” of Chapman’s 1889 Weeks genealogy. Interested descendants and genealogists are urged to consult the full articles in the New Hampshire Genealogical Record to compare her findings with Chapman’s — and to evaluate for themselves Ms. Ireland’s research, documentation, and analysis. 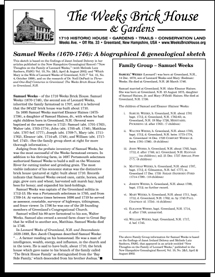 Getting started on your Weeks genealogy

For those just getting started on their Weeks family genealogy, the adage of “start with what you know” cannot be overemphasized. For an informative introductory overview of genealogical research by the New England Historic Genealogical Society, click here. In addition, you may find the links/publications listed below helpful to your research.

by Jacob Chapman (Albany, N.Y.: Munsell’s & Sons, 1889). This is a link to the Google Books online copy of this 184-page Weeks family genealogy book, which is in the public domain. (Beware of Chapman’s errors. As with all genealogies of any period that do not cite primary sources, always verify the published information.)

Genealogical and Family History of the State of New Hampshire

“a record of the achievements of her people in the making of a commonwealth and the founding of a nation.” (Chicago, Ill.: Lewis Publishing Co., 1908). This is a link to the Google Books online copy of this public domain collection of New Hampshire genealogy information, including information on the Weeks family.

Vols. 37-52, 1883-98, by the New England Historic Genealogical Society, Boston, Mass. A search of this Google Books link will yield information on the Haines and Weeks families of Greenland, N.H. taken from articles in the NEHGS Register.

This site, based in the UK, maintained by Harry Wykes, is a clearing house of information — over 5000 pages — on the Wykes-Weeks surname, its origins, and its many variants, such as Weekes, Wickes, Weykes, Wixe, Wyche, and many more. On the site’s home page, researcher Francis C. Wykes notes that the earliest record of the name he has found is in the Anglo Saxon Chronicle of AD 1002, which mentions one Sygmund Wycha, “freeholder and huntsman”.

OK, it’s true that we all have something worthwhile to contribute in this world, but here are some especially notable descendants of family progenitor Leonard Weeks of Greenland, N.H.:

Grenville Weeks, son of Dr. Cyrus Weeks (1806-1875, b. Sanbornton, N.H., d. Hoboken, N.J.) and Maria Child, followed in his father’s footsteps and became a surgeon. He spent many years among Native American tribes serving as a surgeon, and became secretary of the New York Indian Commission. During the Civil War he served aboard the USS Monitor, which sank on December 31, 1862 during a violent storm off of Cape Hatteras. The Monitor was overhauled in Washington, D.C. in the fall of 1862 and returned to duty in November. She was ordered to join the USS Rhode Island and head to Beaufort, N.C. to participate in the Union blockade of the Carolinas. The Monitor would never make it. On December 30, she encountered a strong storm in the dangerous waters off of Cape Hatteras. Water began to flood the ship, faster than the pumps could pump it out. As the evening wore on, and no relief was in sight, it became obvious that the Monitor was in serious danger of sinking. She sent out distress signals to the Rhode Island, anchored nearby. Throughout the night, the men of the Monitor were removed via whaleboat to the safety of the Rhode Island. Only sixteen men out of a crew of sixty-two were lost — a remarkable feat of rescue given the deadly conditions. At 1:30 a.m., December 31, the Monitor sank. The wreck would be found 112 years later. Grenville Weeks wrote about his experience and the last hours of the Monitor. The Atlantic Monthly published “The Last Cruise of the Monitor” in March 1863. To read the full article, click here. 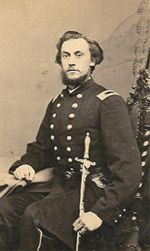 An artist, painter, & world traveler, he was known for his exotic oriental scenes. The son of well-to-do spice and tea merchants from Newton, Mass., his talent was encouraged, and at age 21 he opened his own studio. Decades of travel and productive years of painting followed. In 1895 he wrote and illustrated a book of travels, From the Black Sea through Persia and India, and two years later he published Episodes of Mountaineering. He died in Paris in 1903. The web site, www.edwinlordweeks.org, includes a detailed biography and images of 92 paintings. 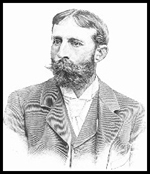 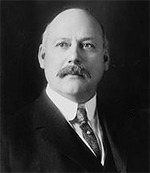 Start your own Weeks surname research! To go to the Wikipedia page with a list of people with the “Weeks” surname — famous & infamous — ordinary & odious — and probably very few descendants of Leonard Weeks, click here. 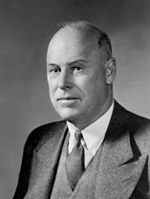 Don’t forget the Local History Page! Local history and genealogy are intertwined — the study of either discipline always illuminates the other. For example, those seeking the “big picture” of history benefit by learning about individuals who contributed to it. Conversely, those seeking genealogical details about one individual benefit by absorbing “big picture” context — period context that adds human presence to the dry records of a long-gone ancestor.

DNA analysis --- the study of our individual genetic "fingerprints" --- will ultimately enable genealogists to use hard science to corroborate --- or invalidate --- our records-based research. As such, DNA analysis represents the exciting future of genealogy. A DNA...

END_OF_DOCUMENT_TOKEN_TO_BE_REPLACED

Are you chasing the right immigrant ancestor?

For Weeks family researchers there is often confusion over a number of 17th-century immigrant ancestors with the same Weeks surname. The information below may help you determine whether you are chasing the right ancestor. A Genealogical Dictionary...